by Miranda Forsyth | Domestic and Gender Based Violence, Justice 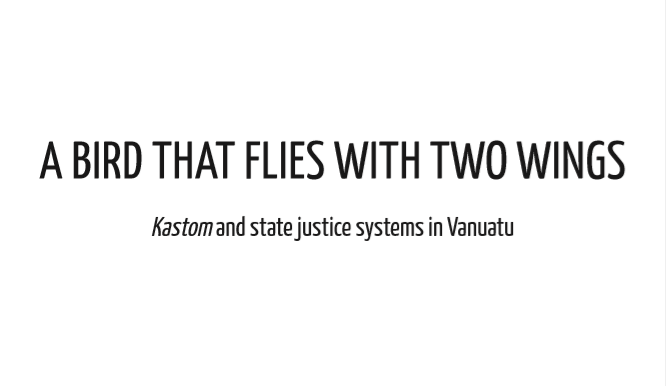 Miranda Forsyth researched and wrote this book while teaching at the University of the South Pacific Law School in Vanuatu for the past six years. During this time, she acquired depth and breadth of knowledge of law and kastom in the South Pacific beyond Vanuatu from students who attended her classes from island societies all over the South Pacific. She also enjoys a broad network of indigenous and non-indigenous friends in Vanuatu who are deep thinkers and repositories of great learning about Melanesian kastom. All this combines with the sharpness of Miranda Forsyth’s intellect to equip her to write an ambitious book such as A Bird that Flies with Two Wings.

One thing that impresses about the book is the wide-angle lens through which it views not just one island or language group of Vanuatu, but the whole, broad diversity and patterns of Vanuatu kastom and how that plurality interacts with the entire national criminal justice system of Vanuatu. That ambition has demanded impressively extensive fieldwork. There is no more important calling for social scientists born in Australia, like Miranda Forsyth, than to document and draw out the implications of the diversity of the cultures of the South Pacific. No part of the world has more linguistic and cultural plurality than Melanesia. As geographical mobility increases, almost everywhere in the world is becoming more culturally diverse than it used to be. At the same time, everywhere in the world is caught up in certain homogenising influences of globalisation. So there is special merit in ANU E Press concentrating its admirably open-access publishing on lessons from the most diverse part of the world on how it sustains that diversity while coping with globalisation that homogenises.

There are few more globalised institutions than criminal justice. Until a couple of centuries ago, very few societies had the distinction between criminal and civil law that was invented in Europe. Today every nation in the world recognises that distinction in its law. It was only in 1829 that Sir Robert Peel introduced the organisational innovation of a paramilitary organisation dedicated to crime control when he established the London Metropolitan Police. That institution has utterly globalised. There is no city in the world one can visit without seeing police in their almost invariably blue uniforms. Before Peel’s Metropolitan Police, constables were generalist regulators of overwhelmingly civil law obligations.

My own view is that the globalising Peelian revolution in policing was a desirable and necessary thing for metropoles such as London, but not a good thing for village societies such as Vanuatu.1 Vanuatu might be better served by regulatory generalist village constables rather more like the village constables of eighteenth-century England, America or France. One reason for this is apparent in Miranda Forsyth’s work: village constables can get most of their work done by going with the grain of customary law, and this depends on rich local cultural knowledge more than police academy training in criminal law and its enforcement. At the same time, a degree of training in formal Western law can give the village constable a role as a check on customary abuses of power—for example, of husbands against wives. Miranda Forsyth’s text is full of insight on formal law as a check and balance against the abuse of power by informal law, and vice versa.

This book also shows some of the ways in which the prison is a less than comfortable transplant from the North Atlantic to the South Pacific. While Vanuatu was not a penal colony, nearby Australia was a British penal colony and New Caledonia a French one. The colonies of the South Pacific were formed at the time of the great debate between the penitentiary and banishment to remote territory (transportation). Siberia was the only part of the world that was a bigger destination for transported European convicts than the South Pacific. The greatest intellectuals of the dominant powers of the transportation era—Bentham in England, de Toqueville in France—concluded that the penitentiary was a civilisationally superior innovation for inducing penitence, so transportation to the South Pacific ceased and instead prisons were built all over the Pacific. An irony was that the destination region had no history of building prisons, but a rich variety of traditions of banishment, including banishment across the ocean. Just as Vanuatu needs a Peelian police presence in its capital city, so it probably needs a prison there for some of those banished from or disaffected with village life, who migrate to survive on the edge of urban life. It is, however, harder to understand the justification for the literal carceral archipelago of lockups right across the South Pacific.

This book is a contribution to legal pluralism as a theoretical tradition—a profound and nuanced one. Readers of the book will acquire a richer understanding of the options for how state and non-state justice systems can productively and counterproductively interact. It turns out that most citizens of Vanuatu find some things that they like about their state and their non-state justice systems, and some things they don’t like about both. This is the empirical foundation for the imaginative theoretical and policy analytical work Miranda Forsyth tackles in exploring options for synthesis, for different kinds of checks and balances between state and non-state law.

Myopically conservative political leaders in nations such as Australia often excoriate the idea of granting recognition to indigenous customary law by saying something like, ‘We have one law that applies to all Australians.’ Actually, we don’t. If you belong to the tribe called stockbrokers, with its special initiation rituals and sacred meeting places, you are subject to special laws that do not apply to those forbidden from entering the sacred meeting places where stockbrokers conduct their rituals to call forth the bulls and ward off the bears that capitalists fear. As a stockbroker, you have little to fear from the criminal law that applies to all; your biggest fear, apart from the bear, is that the membership of the exchange will vote to banish you or suspend your membership for a period. Likewise if you are a doctor, one of the worst things that can happen to you is your professional college suspending your right to practice. Few matters of social protection in complex modern societies are as important as protecting us from dishonest or unprofessional financial brokers and doctors. Yet as a society we choose not to use the criminal law as the main defence against their predations. Multinational corporations have hugely significant private justice systems of a transnational reach that state justice systems cannot match. Even smaller organisations such as schools—private and public—have private justice systems. Hence, if one child criminally assaults another in the school playground, rarely will the police be called. The school will often mobilise its school anti-bullying policies and convene a gathering of affected students, teachers and parents to decide on a remedy or sanction.

Larger education institutions such as universities these days have their own private police; if an assault occurs in a lecture theatre, they will be called to manage the situation rather than the public police. In modern complex societies, according to Clifford Shearing, we move from one bubble of private security to another. We land at an airport and are protected by airport security; we stop at a shopping mall and are protected by mall security; we go to a workplace to be protected by workplace security; or to a nightclub protected by its security. The main role of the state police has become to look out for us when me move from one bubble of private security to another. This is the paradox of contemporary legal pluralism and why we have so much to learn from the sharper, more visible contests between state and non-state regulatory orders in a place such as Vanuatu. While globalisation in some ways—for example, Peelian police, prisons, courts—makes Vanuatu more like the West, in other ways globalisation is making the West more like Vanuatu, with the global proliferation of more and more private justice systems and private policing bubbles.

This book therefore does much more than simply instruct us in some important lessons in how law does and might work in Melanesia. It also contributes some remarkably clarifying thinking about different ways we might craft legally pluralist governance. It is possible for the strengths of formal law to cover weaknesses of customary law and vice versa. It is possible for one form of law to reinforce and enable the productive development of the other. Equally, it is possible for formal law to crush virtues of kastom and for kastom to crush virtues of formal law. Miranda Forsyth’s thinking on these questions is much more systematic than anything that has gone before. It is a tour de force of criminal justice in Vanuatu and of the complexes of legal pluralist policy choice. This is also imaginative scholarship that takes us on a journey of enjoyable reading.