Adaptation and Resilience in Vanuatu 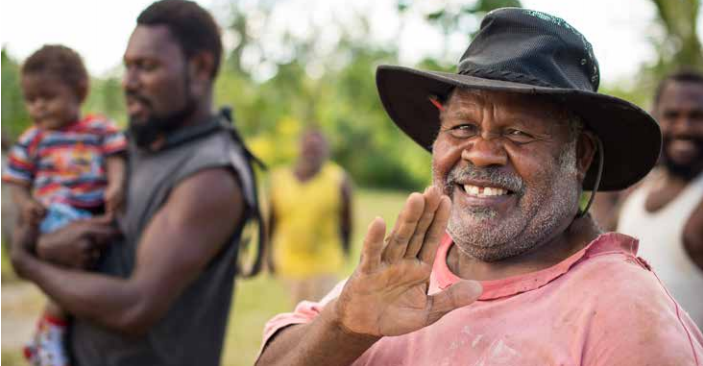 The report documents findings from fieldwork in Vanuatu undertaken during November 2014. The intention is to contextualise the resilience building work of the Vanuatu NGO Climate Change Adaptation Program within themes that have emerged within the academic literature on climate change adaptation and resilience, and on community-based adaptation in particular. These themes challenge those concerned with adaptation to think more critically about the nature of communities, and to explore how power and politics at different scales (from the local to the global) influence the opportunities for and constraints on adaptation for different members of a community. The resilience perspective pushes understanding of adaptation further, inviting systematic consideration of how programming can address not only climate change impacts, but also how agency and structure can be addressed to empower vulnerable groups in the face of climate change.

The findings draw attention to how vulnerability is defined by multiple interconnected issues that have different significance in the lives of different community members, each of whom have their own perceptions of risk and access to opportunities. While relationships defined by power and cultural norms shape how local risks are understood, prioritised and managed in adaptation decision making processes, a focus on equitable decision making can support the emergence of adaptive capacity that is the basis for future adaptive actions that benefit the whole community. Adaptive capacity also demands opportunities for local people to build their technical and decision making capacities and relationships with external actors. While this is increasingly understood by the agencies working within the Vanuatu NGO Climate Change Adaptation Program at the level of rhetoric, it remains for a deeper change in perspective to develop. It will take a significant investment of time if NGOs are to step back and restrict themselves to facilitating community access to information and knowledge as a precursor to informing their own processes of decision making. For the most part, structural issues, which fundamentally limit adaptation and development choices, remain in the background to the projects studied during the fieldwork. The baseline assessments that underpin community-based adaptation must take account of structural issues at multiple scales, and establish whether support for more equitable social, cultural or political change is a necessary part of action on adaptation.

Taken together, this analysis supports the intention of the program to shift community-based adaptation away from its comfort zone. However, agencies will need to work hard to push beyond the familiar focus on climate change impacts and capacity building that supports individual agency, and towards actions that link agency and structure through support for broad-based coalitions for change. In support of this goal, rights-based strategies are proposed to address structural constraints on adaptive capacity. By exploring the mechanisms that underpin marginalisation and exclusion, rights-based approaches enable development actors to support vulnerable communities in seeking reform via social and political processes or through appeal to legal or administrative systems.