Children, Women and Men with Disabilities in Vanuatu: What do the data say?

by UNICEF | Rural Women, Women and Girls with Disabilities and LGBT 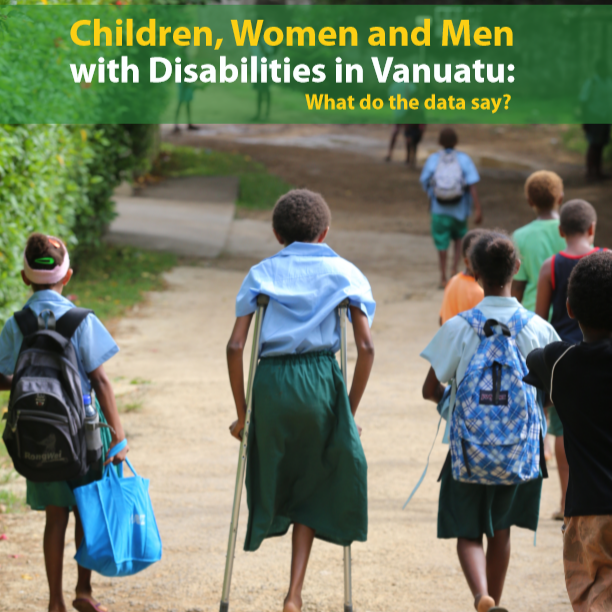 Global evidence indicates that children and adults with disabilities are among the most marginalized and excluded groups in society. They are often excluded from the economic and social life of their communities, lacking access to school, health clinics, public transportation, public spaces, work sites and community events. This exclusion can result from inaccessible infrastructure, and from institutional barriers and discriminatory attitudes.

To promote the inclusion and full rights of children and adults with disabilities, the United Nations General Assembly adopted the Convention on the Rights of Persons with Disabilities (CRPD) in 2006, affirming that people with disabilities are entitled to equal participation in society. This idea is encapsulated in the CRPD definition of disability: “Persons with disabilities include those who have longterm physical, mental, intellectual, or sensory impairments which in interaction with various barriers may hinder their full and effective participation in society on an equal basis with others.”

The Republic of Vanuatu signed the CRPD in 2007 and ratified it in 2008. Accordingly, the Government of Vanuatu has undertaken a number of important steps since then to move forward towards implementing the CRPD. It established the National Disability Policy and Plan of Action 2008-2015, the Mental Health Policy and Plan 2009-2015, and the Inclusive Education Policy and Strategic Plan 2010-2020. The Government of Vanuatu also created a Disability Desk within the Ministry of Justice and Community Services to monitor the implementation of disabilityrelated policies and to coordinate collaboration with government institutions, civil society and development partners. Moreover, efforts are underway on a variety of service provision programmes, including community-based rehabilitation, physiotherapy, sports therapy, and awareness-raising activities.

Disability statistics are essential for informing policy makers and building the case for the advancement of policies, funding and programmes for fulfilling the rights of children and adults with disabilities. The Government of Vanuatu has collected data on disability using different instruments: the 2009 National Population and Housing Census (NPHC); the 2013 Vanuatu Demographic and Health Survey (VDHS); and the 2014 Vanuatu Disability Pilot Survey (VDPS). Administrative data on children with disabilities enrolled in school are also available from Vanuatu’s Education Management Information System (VEMIS). Each of these disability data collection instruments has advantages and limitations.