Engaging with Human Rights through Theater: A Case Study of the Vanuatu Rainbow Disability Theatre Group

by Amy Mawdsley | Others 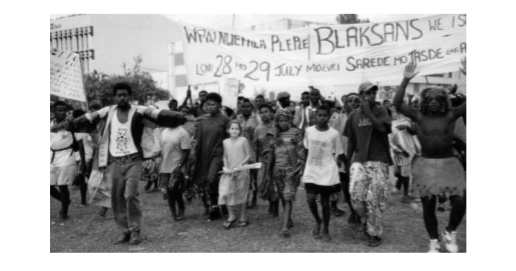 Wan Smolbag (wsb) plays a critical role in the wellbeing of Vanuatu and Pacific Island communities, whether it is engaging youth in theater, providing reproductive health care, creating dialogue around good governance or protecting fragile Pacific ecosystems. To give a sense of wsb’s approach to human rights education and what makes it a unique organization, the following are responses from people who work at wsb to the question, “What makes Wan Smolbag so remarkable?”

[At Wan Smolbag], we talk a lot about life as a human being – that’s why they’re interested in talking to us. What we talk about are things in daily life. We talk about the issues that are affecting people. If you go out and talk about the Rights of the Child, for example, they will listen, but it may not really change how they behave. But [we] deal with things in life, and this is what’s really interesting for communities. When we go out they all have lots of questions for us.

I think the most unique thing about Wan Smolbag is that we create a platform for dialogue, and I think that’s where the drama makes us so unique. That medium is just a very powerful way of engaging communities.

The way we treat people in the organization – Recognizing people as being people and not like part of a big machine. And also the way we work with communities – we are not coming with an approach of “we know what is best for you and you need to do this.” We are actually finding out about their lives and using that information to create a workshop or drama production that helps them to discuss the issues, and find ways of addressing them or improving their lives.

The following paper provides an example of wsb’s approach to human rights education, which was not premeditated as human rights education, but grew out of a natural progression from the wsb community theater group. This paper begins with a history of the growth of wsb and its programs, followed by case studies of the current play by the Rainbow Disability Theatre Group’s play, Ae Blong Hem I Blaen Nomo. The next section discusses the strengths of and barriers to wsb’s approach. This involves factors including writing a play which is both engaging and informative, and defining the group as a recreational activity or a job. The paper concludes with a summary of the strengths and weaknesses of the wsb approach and key elements of the wsb model which may be of use in adapting it to other organizations and contexts.

Almost twenty-five years ago, wsb began as a small theater company of fifteen voluntary actors, and then five paid actors, focusing on theater and initiating dialogue around reproductive health and population. Reproductive health was a clear starting point as these issues were not openly discussed, and there was a lack access to reproductive health services and information. wsb’s name is from a Bislama phrase meaning “one small bag”; over the last twenty-five years, the theater groups have traveled to communities across Vanuatu, to create exciting and engaging performances and workshops, with only “one small bag.” Based on identified challenges and gaps, wsb organically expanded its focus on theater and reproductive health, to include several issues including governance, education and the environment.