Gender and Climate Change: A Closer Look at Existing Evidence 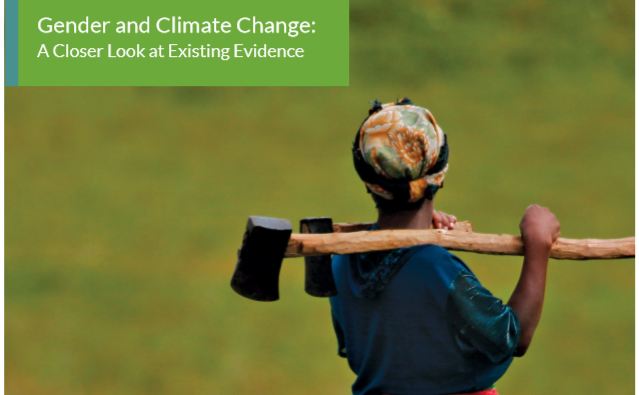 The impacts of climate change are already being experienced by each and every person around the world. However, these consequences are not being experienced evenly, and certain individuals are disproportionately affected. These individuals tend to face social, economic, cultural, and political inequalities and often live in places, such as coastal regions, that are heavily impacted by disasters related to climate change. In addition, they often lack the resources and capacity necessary to adequately respond to these challenges.

One important area of inequality is that of gender, the focus of this review. Gender inequalities have social, economic, political, and cultural implications for individuals responding to climate change. Examining gender is important because women, men, boys and girls, while hardly homogenous groupings, tend to have systematically different experiences in relation to climate change based on the inequalities associated with socially constructed gender roles (1, 2).

Gender serves as an important dimension of both vulnerability and adaptation, that is, whether and how women, men, boys, and girls are affected by and respond to climate change (3, 4). Vulnerability is commonly understood as social, economic, political, cultural, or other factors which make specific groups more susceptible to adverse change (5). Adaptation is the ability to change in response to the impacts of an event in order to minimize adverse consequences (6). Although discussions about gender often revolve around women and girls, who, in some contexts, are disproportionately vulnerable to the impacts of climate change, men and boys also have unique vulnerabilities which should also be addressed through changes in policies or practices. Such change can be brought about through a process of gender mainstreaming, that is, ensuring that gendered concerns are addressed and that the policy or practice does not further existing gender inequalities (7).

GGCA views gender as a lens through which to understand individual experiences of climate change. While acknowledging that it is an oversimplification for ease in this document gender is discussed in binary terms, as females and males tend to have different experiences around climate change that we wish to highlight. Readers who would like to see a more nuanced discussion of gender issues are directed to resources cited in the discussion on page 33 (For Further Reading: Feminist Critiques of the Gender and Climate Literature).

Additionally, gender is one of many dimensions of vulnerability and adaptive capacity. Differences in experiences related to climate change are not limited to distinctions between women and men or boys and girls, but also have dimensions that are influenced by other social categories, such as age, class, race, ability and sexuality, among others. The contexts in which females and males live influence how other social categories affect their experience with climate change (8, 9). Although these characteristics are not discussed in detail in this piece due to space limitations, readers are encouraged to be mindful of them when using the evidence contained herein, as they often form an important component of the contexts in which gender-related differences in climate change experiences develop.