by OXFAM | Rural Women, Women and Girls with Disabilities and LGBT 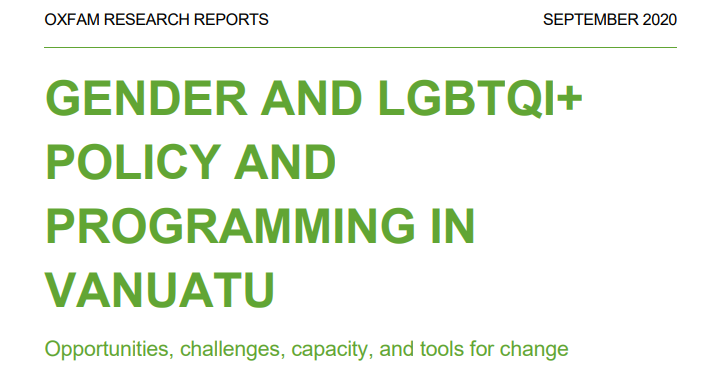 In response to persistent challenges of gender inequality in Vanuatu, the government introduced a National Gender Equality Policy (NGEP) in 2016. The policy lapsed in 2019, and a second phase (NGEP 2) will be implemented for the period 2020–2024.

The aim of this research is to identify key factors contributing to successes or challenges in implementing the first phase of the policy by exploring the experiences, insights, and perspectives of individuals working on gender in Vanuatu. Insights on these factors can help inform and support the implementation of the NGEP 2, as well as gender work in Vanuatu more broadly. A specific focus within the research is to investigate perspectives on the inclusion of LGBTQI+ communities within the policy and in related work. Findings are based on key informant interviews and focus group discussions (FGDs) conducted in Vanuatu in February and March 2020.

Key themes that emerged from the research were the importance of institutional capacity and of awareness and attitudes around gender and LGBTQI+ topics among individuals in key institutions. Informants reported that the NGEP strategic areas were well aligned with the content of programming and internal gender policies of many institutions working on gender in Vanuatu. Coordination of the work itself, however, was perceived as lacking during the first phase of the policy. Critically, informants saw the need for an implementation plan and a monitoring and evaluation framework; both are apparently priorities in the development of the NGEP 2. There is also a reported intention by the DWA to better coordinate with nongovernmental organizations (NGOs) and civil society organizations (CSOs) to map ongoing gender work to the NGEP strategic areas.

A lack of dedicated time, resources, and expertise for the implementation of gender work under the NGEP were also identified as challenges, and overcoming these shortfalls is a priority for the NGEP 2. The Department of Women’s Affairs, for example, which is responsible for developing the policy, has historically received limited funding and lacks institutional support and authority for policy implementation.

The establishment of gender focal points (GFPs) in some government ministries was seen as a positive step toward integrating gender into government processes and practice. Along with the development of internal gender policies, GFPs were seen to provide critical visibility and accountability for gender. However, progress requires broader buy-in and support for gender objectives, particularly among senior decision makers, and achieving such support is likely to require sensitization in the form of awareness raising and efforts to shift attitudes and behaviors.

The absence of any mention of LGBTQI+ individuals—commonly referred to as SOGI in Vanuatu—in the NGEP was seen as a gap that should be addressed in the second phase of the policy. However, the subject of SOGI remains highly contentious in Vanuatu, even though there are some indications of shifting attitudes. Balancing the various viewpoints is a challenge and will require a sensitive approach. Nevertheless, the inclusion of SOGI in a national policy would facilitate progress toward realizing the human rights of these members of Vanuatu society.

The Gender-Just Social and Economic Empowerment Design (SEED) tool developed by Oxfam offers a resource that could be used to support implementation of the NGEP 2 and related programming. The focus here is on the SEED tool primarily because this research was commissioned by Oxfam, which meant that Oxfam in Vanuatu could facilitate access to SEED sites, data, and respondents. Interviews and FGDs were conducted at three SEED pilot sites to evaluate outcomes of SEED in these communities. SEED was found to provide valuable insights into existing dynamics and perspectives around gender and SOGI within communities and showed some success in raising awareness and changing attitudes. It also showed the value of building capacity around gender and SOGI among the staff involved in delivering programs. The NGEP 2 for 2020–2024 offers considerable potential for making real progress toward gender equality in Vanuatu. Insights from the first phase of the policy provide valuable lessons that will hopefully be applied to maximize the effectiveness of the next phase.

As in many countries, gender inequality is a persistent development challenge in Vanuatu. In 2016 the government introduced the National Gender Equality Policy (NGEP) to “promote equal rights, opportunities and responsibilities among men and women and to eliminate all forms of discrimination and violence against women and girls.”1 The policy recently lapsed, and a new phase of the policy—the NGEP 2—will be implemented for the period 2020–2024.

The successful implementation of the NGEP 2 depends on a number of factors. One key factor is the capacity of the individuals and institutions whose work will be influenced by the policy and on whom its successful implementation depends. This capacity includes expertise, time, and personal commitment to, or support for, the policy’s aims among individuals working in key institutions, including local and international nongovernmental organizations (NGOs) with gender-relevant programming and government ministries that have introduced gender-mainstreaming measures or plan to do so. To evaluate factors affecting the implementation of the NGEP to date and the prospects for progress in the next phase, it is critical to capture the insights of people who have experience working in related roles during the initial NGEP policy period.