Programme of Action of the International Conference on Population Development 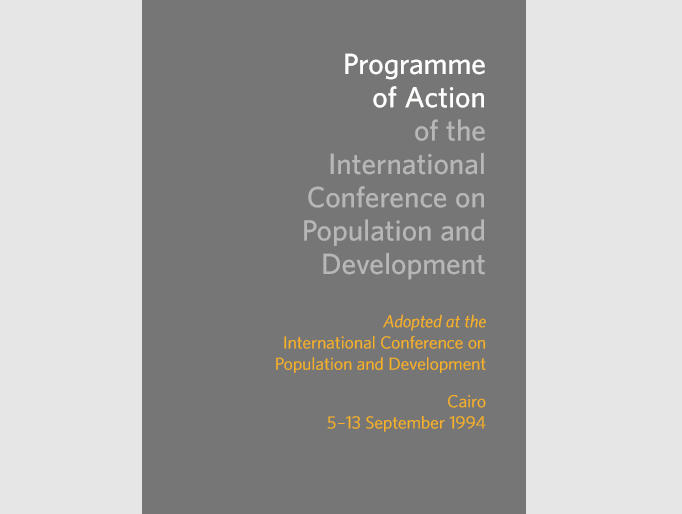 Adopted by 179 governments, the ICPD Programme of Action marked a fundamental shift in global thinking on population and development issues . It moved away from a focus on reaching specific demographic targets to a focus on the needs, aspirations and rights of individual women and men . The Programme of Action asserted that everyone counts, that the true focus of development policy must be the improvement of individual lives and the measure of progress should be the extent to which we address inequalities.

Informed by inputs from participating governments, UN agencies, and intergovernmental and non-governmental organizations, delegates from all regions and cultures agreed that human rights, including reproductive rights, were fundamental to development and population concerns . They also recognized that empowering women and girls is both the right thing to do and one of the most reliable pathways to improved well-being for all and sustainable development . This vision, which has been regularly reinforced by successive intergovernmental agreements, has driven the work of UNFPA .

The ICPD Programme of Action provided a foundation for the Millennium Development Goals and has contributed to significant improvements in poverty reduction, health, education and gender equality over the past twenty years . These development gains have not, however, reached everyone and significant gaps and inequalities remain . UN General Assembly resolution 65/234 recognized that the ICPD agenda remains unfinished and has extended the Programme of Action indefinitely . Governments also requested an operational review of implementation of the Programme of Action on the basis of the highest quality data and analysis of the state of population and development that takes into account new challenges and the changing development environment as well as the need for a systematic, comprehensive and integrated approach to population and development issues . This review has provided a framework for tackling gaps and barriers in the achievement of the Cairo vision .

This Anniversary Edition coincides with the presentation of the Secretary-General’s report on a new Framework of Actions for the follow-up to the Programme of Action of the International Conference on Population and Development (ICPD) Beyond 2014 . It also comes at a time when the global community is working to define the focus and content of future sustainable development