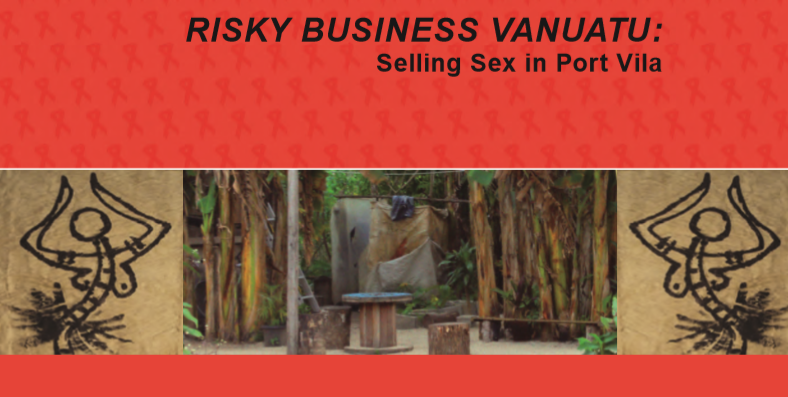 The study sample is non-random and therefore the results cannot be considered to be generalisable to all sex workers in Vanuatu. However, the type of sex work captured was consistent with the characteristics of typical sex work in Port Vila reported in a 2007 survey1. the data presented here provides a nuanced description of the motivations for sex work, the conditions under which it occurs and the conceptualisations of client and other sexual relationships in the lives of the sex workers who participated in this study. this information should be valuable to those who wish to provide HiV prevention, sexual health and other services to sex workers in Port Vila.

Participants were aged between 16 and 36 years old. the average age was 24 years. While most participants began sex work long before they were 18 years of age, all the sex work undertaken by study participants had been freely chosen, the sex workers operated independently. sex work was very informal, and few of the interviewees explicitly self-identified as sex workers, despite regularly exchanging sex for money.

Sex work occurred in the context of unemployment and lack of access to cash. the data also indicated that while exchanging sex for money was considered to be somewhat shameful and was practised covertly, it was also believed to be a common practice.

Two distinct modes of selling sex were evident. in the first, small groups of sex workers frequented bars, nakamals2 and nightclubs in the evenings to find clients and the sexual encounter took place immediately after it was negotiated. in the second, the sex worker worked alone and meetings for sex were prearranged. in this second pattern, clients were regulars or had been found during daytime excursions to town and arrangements would be made to meet for sex later. these modes of operation were not exclusive and some interviewees adopted both. those who worked exclusively in the second mode were the most covert in their activities and not part of any wider networks of sex worker friends.

Sex work began at a young age. Most interviewees were younger than 16 years old when they began sex work, and some were as young as 11 and 12 years. While friends and peers played a central role in the introduction to sex work, none of the participants had been coerced into sex work.

The money earned from sex work was primarily spent while in town, on consumer goods and also on food, drinks and kava while out with friends. Few interviewees needed their earnings for daily food and shelter; but for most participants, the money earned through sex work afforded them some independence and autonomy along with access to cash.

Sex workers expressed a preference for condom use but were inconsistent in their use of condoms with clients. Condoms need to be free and at hand to maximise uptake. While the quality of condoms was raised as an issue, most sex workers would not pay for condoms. Conditions of privacy and confidentiality were also very important to whether sex workers would pick up free condoms. Privacy and confidentiality are not merely a matter of shame but may have implications for the personal safety of sex workers.

Information about the protection that condom use offered from HiV and other sexually transmissible infections (stis) had an impact on sex workers’ attitudes to condoms. there were many misconceptions about condoms and a poor understanding of the role they play in preventing stis and HiV transmission. some sex workers and some clients did not know how to put a condom on a man.

Clients were both foreign and local. Local clients were particularly averse to condom use. Clients’ wishes usually determined whether or not condoms were used. Overall, the sex workers in this study were not confident or competent enough negotiators to convince a reluctant client to use a condom. those sex workers who had accurate information about the role and efficacy of condoms in preventing HiV and sti transmission did actively encourage clients to use condoms.

Nakamals, bars and nightclubs are common sex work sites, and kava and alcohol drinking and sex work are intertwined. the combination of alcohol and kava and sex work may exacerbate risk as intoxication compromised intentions to use condoms. Drinking was also reported to be associated with lowered inhibitions and more adventurous sex than usual. Watching pornographic films with clients was also associated with sexual experimentation, and viewing usually occurred in the context of a drinking session.

Along with the hazards of excessive alcohol and kava consumption and the elevated risk -taking associated with intoxication, forced sex was another danger associated with sex work. the heightened vulnerability to rape and sexual assault, however, appeared to be a consequence of being publicly exposed as a sex worker.

Sex workers were variously encouraged to stop sex work by their church and also by health service providers. sometimes families of sex workers beat them to convince them to stop. For those interviewees who had agreed to give up sex work, the undertaking resulted in a more covert approach to sex work.