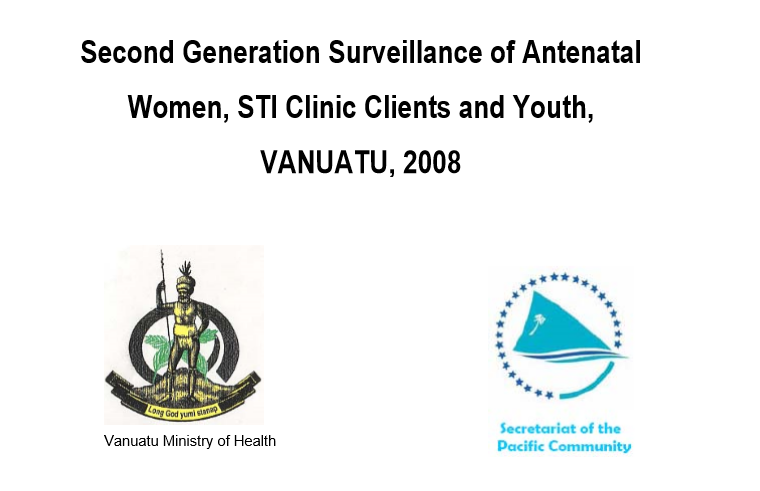 Vanuatu is comprised of a Y-shaped collection of 80 islands, 65 of these being inhabited. The country spans a distance of 1,100km from the Torres Islands in the far north to the barren Matthew and Hunter Islands in the south. The island republic is divided into six provinces named after the group of islands each province is comprised of:

This report includes the findings from the three Second Generation Surveillance (SGS) surveys of sexually transmitted infections (STIs) and Human Immunodeficiency Virus (HIV) prevalence and risk behaviour, which were conducted in 2008:

The Antenatal women’s survey was conducted at the Vila Central Hospital, in Port Vila, the same site where it was conducted on the first round of SGS in 2005. The STI clinic attendees and youth surveys were also conducted in Port Vila, Efate in keeping with the previous round of SGS. Information on sexual behaviour and risk factors was collected from all participants through interviewer administered questionnaires. In addition, antenatal clinic attendees were tested for HIV, Hepatitis B virus, syphilis, Chlamydia and gonorrhoea infections, and STI clinic attendees were tested for HIV, Hepatitis B virus and syphilis infections. The surveys were carried out between April 2008 and July 2008.