Temporary Special Measures to Increase Women’s Political Participation in the Pacific: Case Studies of Implementation in the Region 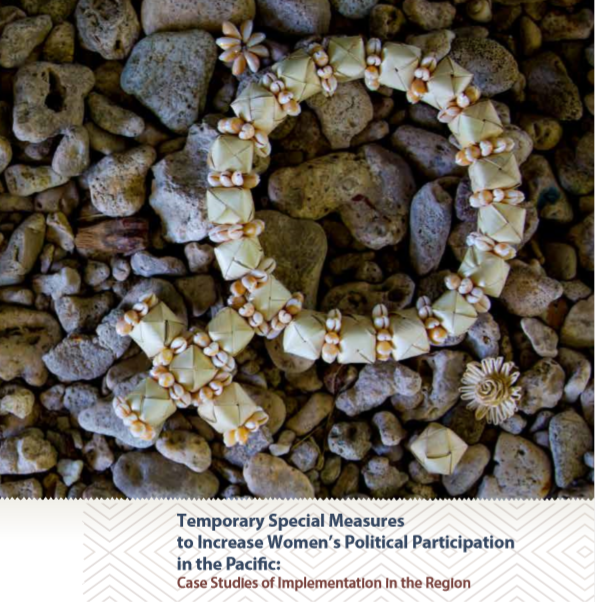 Women’s empowerment and political participation are a matter of human rights. While the right to vote and contest elections is now widely available to women all over the world, the goal of gender balance in political institutions is still far from being achieved.

The Pacific region is no exception. Indeed, in this region, the level of women’s representation in parliament is among the lowest in the world. Even including Australia and New Zealand, according to the Inter-Parliamentary Union (IPU), women comprise less than 16 percent of all parliamentarians in the Pacific, fewer than in any other region.

In many countries, a fast-track measure to improve the number of women elected to parliaments has been the adoption of electoral gender quotas – namely reserved seats or candidate quotas. Capitalising on the increasing trend of adopting such measures in the Pacific, a regional conference was organised with participants from 13 Pacific Island countries and territories, including Ministers, Speakers of Parliament, Members of Parliament, as well as representatives of civil society and electoral management bodies.

Participants engaged in meaningful discussions on measures that have been successfully implemented in Bougainville, New Caledonia, Samoa and Vanuatu. Reserved seats for women have been established in the electoral frameworks of Bougainville and Samoa, guaranteeing at least three and five seats, respectively, for women. Reserved seats are also provided for women contesting municipal elections in Vanuatu. Here, one seat per ward is reserved for women. When the law was first applied in the municipal elections of Port Vila in 2014, five women were elected – four on reserved seats, and one on an open seat. The Parity Law enacted in France in 2000, is applicable to all French territories including New Caledonia. This law requires that political parties present candidate lists that include an equal number of male and female candidates, and alternate those names down the list. Women, today, represent 44 percent of the New Caledonian assembly, and 52 percent in French Polynesia.

While efforts have been made to adopt similar measures in other countries of the region, these have been met with greater resistance. In Papua New Guinea, where legislation had been drafted to reserve 22 seats for women prior to the 2012 national elections, amendments to the Organic Law did not win sufficient support to pass the parliament and enact the changes. Similarly in the Solomon Islands, grassroots activism has not been sufficient to persuade (mostly male) legislators.

Discussions on temporary special measures (TSMs) are not new in this region. This report, however, aims to address the gap between these discussions, and the practical experience of implementing TSMs in a Pacific context. It is intended to provide decision makers and other stakeholders with concise and accurate information on the steps taken in various Pacific island countries and jurisdictions to implement TSMs.

Following an overview of TSMs and the global and regional commitments that encourage their adoption, this report details the measures successfully implemented in the Pacific, as well as those that have not passed. Lessons learned in each country are shared with the aim of furthering regional knowledge and acceptance of these measures.