by UN Women | Domestic and Gender Based Violence, Justice 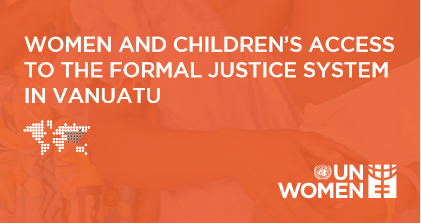 This survey found alarmingly high rates of violence against women and girls in Vanuatu:

Seven years after this ground breaking study, UN Women commissioned research into Women and Children’s Access to the Formal Justice System in Vanuatu.

This Report analyses why an estimated 98% of cases of violence against women and children do not reach the stage of being charged by the police, let alone prosecuted by the courts.6 Why the recent death of the woman referred to in the case study that follows, is not an isolated incident.

The Report opens by summarising 12 Key Findings on why women and children’s access to the formal justice system in Vanuatu is so low and makes some recommendations on how this situation might be improved. The findings align with the views of most justice sector actors and civil society representatives interviewed for this Report. The recommendations indicate probable timeframes for implementation: (i) immediately, (ii) under twelve months, and (iii) over a longer time frame.

of the Report outlines the methodology and timeframe followed in conducting the research.

analyses certain socio-demographic indicators for women and children in Vanuatu and the implications these have for their access to the formal justice system.

of the Report gives an overview of the barriers women and children face in accessing the formal justice system and how these may be addressed. This Part is based on structured interviews with judicial officers, police officers, the prosecution service, state lawyers, as well as counsellors and program officers of the VWC.